With 7 000 employees and clients that rank among the biggest companies in Europe, Girteka Logistics is a transportation heavyweight. The Lithuanian company continues to grow! Key factors of success: “Lean” management and having its own fleet, which now includes 1 100 Actros trucks.

The history of Girteka Logistics from Lithuania begins in Denmark. At the age of 24, Mindaugas Raila bought a single used truck, complete with trailer. A friend in the business of exporting fish had told him that haulage was a good business. A few years earlier, Lithuania had regained independence from the Soviet Union and a new spirit of optimism prevailed in the country. The friend was proven right: with Girteka Logistics, Raila, now aged 44, runs runs one of Europe’s most dynamic transport companies. Today, its almost 3 000 trucks move goods all over Europe for customers from industries such as food, retail and pharmaceuticals. Today the fleet also includes trucks sporting the three-pointed star for the first time, with an order of 1 100 Actros this year. 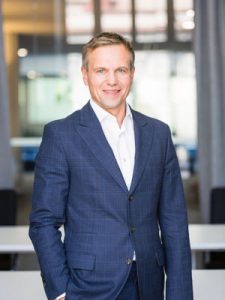 The entrepreneur welcomes our “Mercedes-Benz Transport” team into his office in the country’s capital Vilnius. Did he envisage this much growth when the company was first launched? “No,” he says, and adds: “…or perhaps I did, secretly.” He had only come to realize the full potential at the beginning of this decade. Between 2010 and 2014, the company’s annual growth was in double figures every year, and the number of employees grew accordingly.

“We have a clear focus,” says the entrepreneur in reply to the question as to what was fuelling the company’s growth. “We transport full loads all over Europe. Using our own vehicles and drivers employed on a permanent basis, giving us maximum control.” Like many logistics specialists from Eastern Europe, Girteka Logistics often finds itself confronted with the accusation that its success is based on a distortion of competition, in the form of lower wages for allegedly poorly qualified drivers. The Lithuanians counter this prejudice by pointing out that over 6 000 drivers have a net income of up to 2 000 euros per month. Then there is the company’s new business location in Šiauliai, 190 kilometres northwest of Vilnius. The most important facility here is the “Drivers’ Academy” which runs basic and advanced training courses. Topics range from what to do when encountering black ice on the road to how to deal with the paperwork involved in transport operations to and from Russia. Certified instructors provide training in accordance with Code 95 that applies EU-wide. Drivers are given eco-training and instructed in the handling of reefer semi-trailers.

“Our drivers are the key to success,” says Raila. “Good working conditions are therefore essential.” For this reason, the drivers are given washing machines and dryers as well as secure parking in Šiauliai.

Raila also views the 1 100 Actros trucks as part of investing in good working conditions. All these trucks come with the BigSpace cab featuring a level floor and 1.99 meters of headroom. “In addition, we took a very close look at all aspects of the Actros, and we chose it because of its excellent operating performance and – with an eye on its residual value – because of its impressive economy.”

Efficiency is key throughout the operation. The company’s motto, introduced last year, is “Lean”. The Japanese style of business management requires lean processes – and it calls for all employees to be closely involved in the effort to accomplish this goal. The desired outcome: steady and measurable improvements. “When you are growing as rapidly as we are, an organisation can struggle to keep pace,” says Raila. “That’s why we introduced Lean. And already both we and our customers are reaping the benefits!”

The most well-known Lean principle is Kaizen: improvement through suggestions made by employees, for example. “One such suggestion was to handle complaints via the network instead of by using forms,” says Denis Miklaševskij. At Girteka Logistics’ headquarters he is the person responsible for Kaizen for some 400 sales staff who look after clients in northern Europe. “In the past such a procedure would have taken several days to complete, whereas now we can respond within a few hours.”

Every day at 8.45 a.m. it’s time for “Asaichi”. Be it at the sales offices or at the warehouse, the teams gather in small groups and hold a ten-minute meeting where they address problems and come up with solutions. Key Performance Indicators form the basis for this process: What is the percentage of trucks loaded on time? How many orders were worded ambiguously? The objective is often to identify where time was lost and find ways to eliminate delays. The entire effort is geared towards making Girteka Logistics fit for further growth. The goal Raila has set himself: a fleet of 5 000 trucks and 10 000 employees. What will be next? “The market is still quite fragmented, so there is still plenty of scope for further expansion.”